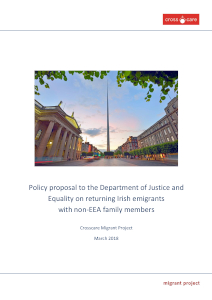 Over 126,900 Irish emigrants have returned to Ireland in the past five years1 on foot of the economic recovery. Crosscare Migrant Project has been monitoring the experiences for many people returning to live in Ireland and facing barriers affecting their re-integration. We have noted an increase from 2015 in queries from clients seeking information on family member visas and residency permission during this period. This was also raised as an issue that has been experienced among recently returned emigrants in our Home for Good? report.

Returning emigrants can be difficult to identify, as can their needs and the issues impacting on their lives during their transition. We conducted a survey for our Home for Good? report to identify recently returned emigrants and their experiences. Many of the issues raised have been quite well publicised but very little is known publicly about the immigration issues affecting returning emigrants and their non-EEA family members